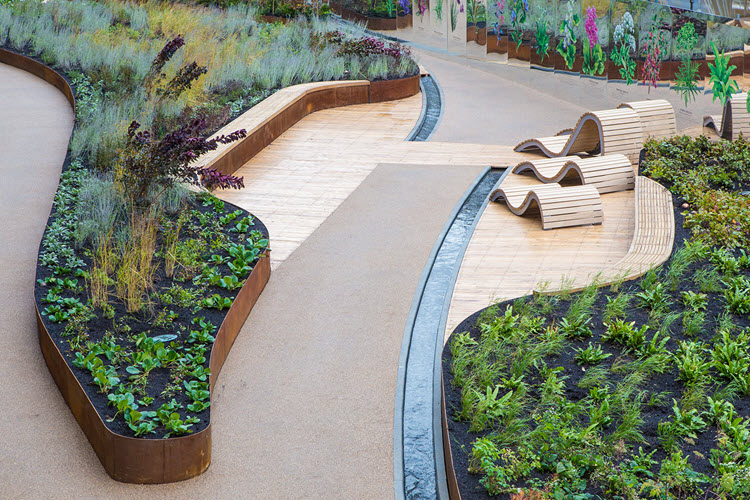 Garsy produces metal structures for plants in public areas. Expanding while continuing to deliver on time, or even faster, was a major challenge for the future and the company wanted to tackle it as quickly as possible. They did so through investments and the implementation of QRM.

The dynamic SME Garsy, in the Kempen town of Malle, specializes in the production of metal street furniture which can be combined with plants. The product range includes edges, flower towers, green walls and planters. These are typically used in public spaces, project construction, roof and city gardens.

The product range is characterized by a high degree of customization. Even though there are several standard products, each product is different; often due to the dimensions. The products are mainly made of weathering steel and bright steel which is shaped by cutting, folding, rolling, welding, lacquering and galvanizing. Garsy has a number of machines at its disposal for this purpose, although they do depend on their suppliers for the finishing.

The company has grown in recent years and Garsy expects further growth for the coming years. In order to simultaneously continue to meet the expectations of customers, the company wanted to optimize the production and support processes.

An important point of attention in this respect was a drastic reduction of the lead times. Average delivery times were usually 4 to 6 weeks and meeting the delivery deadlines was often found to be problematic. However, customers were increasingly demanding short(er) lead times.

One of the difficulties often faced by Garsy is that they are typically called in towards the end of a construction project, when the outdoor spaces need finishing. Due to this late involvement the time pressure for timely delivery, often in addition to delays already suffered by the construction project, is immense. The supplier is often under heavy pressure.

The company contacted Sirris and that is how they ended up with QRM. The Sirris experts performed an analysis of the existing situation for the main products in the range, some of which are custom-made. Measurements showed that make-to-order and make-to-measure products in particular often have a long lead time. The lead time and workshop equipment were reviewed.

An adapted layout was considered in order to reduce walking and transport distances and possibly also improve the working atmosphere and productivity. Operations were grouped on the shop floor. It was also suggested that a small part of the capacity should deliberately not be fully planned to

capacity, in order to create a reserve and avoid having to postpone promised orders. In order to achieve the necessary flexibility in production, cross training was also used to teach more employees to weld. Thanks to the spare capacity and flexible production operators, the production process can also run more smoothly.

In addition to the implementation of a QRM process, the analysis specifically looked into reducing the lead times through investments in sheet metal working machines and CAD/CAM. Garsy largely depended on suppliers for its laser cutting and most of the folding work. The company’s own machinery for sheet metal working consisted of a plate shears and a folding bench, which was too limited to make the products. Moreover, the folding bench was already quite old and not equipped with NC control, so everything had to be set manually. This meant extremely high conversion times, which made it impossible to operate this machinery in a profitable manner.

The need to invest in new sheet metal working machines and in particular to produce customized products in-house, became more tangible. In addition to the gains in lead time, more flexible designs and therefore new products, would also become possible. An additional advantage was that spare or extra parts for an ongoing project could be made quickly. Sirris guided the company in selecting the most suitable machinery for its products and production.

In the course of 2017 Garsy reduced its lead time by approximately 30 percent. The reduction in lead time was rather limited, because at the same time a 52 percent turnover increase was achieved. In addition, the production capacity increased by about 40 percent and thanks to the interventions, the current percentage of production orders is 96 percent on-time. Also there are now no more substantial differences in the punctuality of deliveries between standard orders and the unexpected urgent orders.

*This case study was originally created by the QRM Institute and is under their ownership.